Finally. A place that makes bibimbap well enough that the rice gets crispy and crunchy at the end!

Here’s all that I have left of my meal there, since I forgot my camera (doh!). 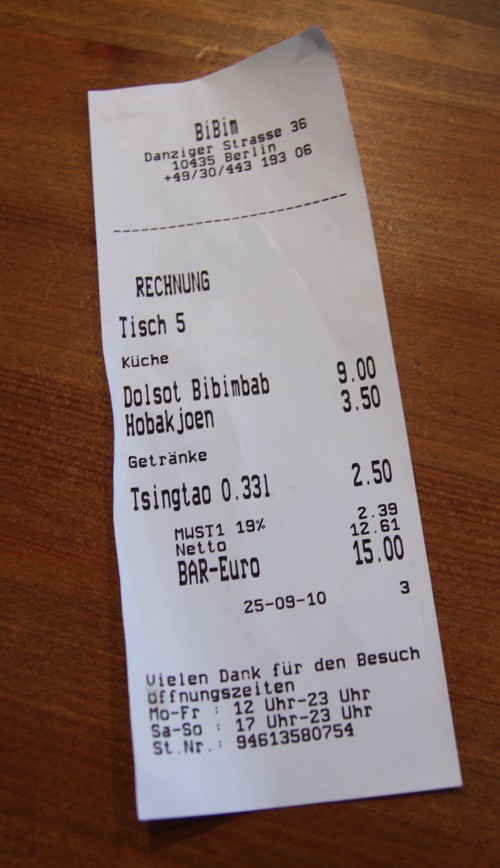 The restaurant just opened recently and I only noticed it while passing by yesterday evening. Two things immediately stuck out to me: 1) the menu contained no sushi, this was not a hybrid fusionized localized place, 2) there was only a husband and wife team inside manning the restaurant at the time, so the menu was also pretty limited. This was good.

Today, I had a chance to drop in and try it out. Awesome! The team was very friendly, seeing as I had arrived at about 3pm, and the place only officially opened at 5pm. I asked about this and the wife said, “Ist kein Problem, alle Vorbereitung schon fertig.” e.g. everything was prepared, so heck, why not come in and eat? As I was ordering, the husband guessed that I had Thai lineage (so making the food spicy would be ok) and then slapped me on the shoulder, chuckling, when I said, “yup, that’s true.” Pretty good guess.

So what did I get? A sizzling bowl of dolsot bibimbap (in the stone pot that comes out of the oven), hobakjoon (zucchini pancakes), and a beer. Along with the bibimbap came a bowl of simple miso soup (not overwhelmingly salty), a small assortment of umami dishes, e.g. a small dish each of kimchi, lotus root and pickled radish, and peanuts mixed with a thick sweet soy sauce. I can’t comment on the zucchini pancakes as to how authentic they were, certainly very very tasty, crisply fried but not too greasy. The bibimbap was fantastic. (Better than, for instance, Yamyam’s, Ixthys’, CORE’s, or Kimchi Princess’.)

It was raining pretty hard today, and I got to the restaurant with wettish feet. As I was getting ready to head out the door, and even after I had paid(!), the husband had made a pot of barley tea and insisted (on the house) that I drink it. Instead of sugar, he offered up a single-serve packet of honey! (And then proceeded to squeeze the whole thing into my cup… which wasn’t meant in any bad way.) In fact, w/o the whole packet of honey it would have been too bitter, so it was a good call. “In dieses Wetter, muss man das Trinken. Ok? Ok.” Another chuckle. Yeah, crappy weather, but great service, even in the off hours.

I’m pretty sure I’ll be stopping by again.