Damn it, not again. So Windows 7 started bluescreening immediately at boot, before I was even logged into my normal user account. Reason? Turns out my solid state disk is hosed. I’m not happy, but I’m also not surprised.

I’d bought two OCZ Vertex 2’s sometime in 2010, and not put all too many bytes onto them over the past four years. One of them had already died some years back, but I was too lazy to call in the warranty service. Now the second drive has died, and both of them are out of warranty! Booo. I thought they had 5 years, but turns out it was only 3. Oh well.

I put a copy of Ubuntu Linux onto a USB stick and booted off of it to see if there were any kernel messages reminiscent of what I’d seen a few years back. Sure enough, ad infinitum:

So I guess I need a new hard drive. Lame.

I’m not sure how it’s still possible in 2014, but, between yesterday and today I changed nothing on my computer and now it is blue-screening every time I log in or shortly after I log in. No hardware changes were made. The only thing I changed (but which seemed to work fine) was to activate Hibernation, by setting a multi-gigabyte hiberfil.sys file, and disabling the “Hybrid sleep” function on Windows 7.

So I went ahead and uninstalled a bunch of things I’d been meaning to clean up (but which didn’t seem to be the source of the crash, since it’s still crashing). I really don’t know what could have changed overnight, but it’s already a huge time suck.

Even after I ran the various uninstallers, a bunch of leftover executables and other garbage are still running on my system, and which I am currently attempting to root out, with the help of AutoRuns, a tool from the Sysinternals gurus. AutoRuns shows all of the various places where a executable (or shell extension DLL, or etc) code is invoked by Windows.

So far, the code that is autostarting that I don’t want to run at all anymore looks like this:

These are all old support drivers and executables from AMD/ATI and Creative Labs. I did once have a Radeon video card in the system, which I replaced with a much more powerful Nvidia card. Frankly, if AMD can’t get their driver development, updating, and cleanup code in order, they should stop making graphics cards. There’s so much extra crap they install (Catalyst Control Center anyone?) but don’t maintain, that it’s very frustrating being left with this crap on my system when I clearly want it gone. Same goes for Creative Labs, talk about a company that makes it a pain in the ass to get new drivers. It’s been like that as long a I can remember.

I probably should not have swapped video cards between manufacturers like that, but come on. Again, it’s 2014, and this is disappointing if this stuff is getting through the Windows hardware certifications. Nvidia’s software also has plenty of bloat which can be cleaned up (which I also just did), but at least they have a fairly regular update schedule and solid support for their older graphics cards too.

Basically, I’m disabling all the drivers except what I think is actually in the system.

Here’s what the AutoRuns Drivers tab looks like after I finished disabling things. These are all drivers that the Windows bootloader will attempt to load when Windows is starting up. You’ve probably seen this list of files when starting Windows in Safe Mode. The thing is, most of this hardware either doesn’t exist anymore, or never existed in widespread use on desktop PCs. So why is Windows checking for it, anymore? Some of those devices are for high-end server systems, with Fibre Channel or SAS connections, but seriously, this code runs on all of the desktops in the world, so who knows how many million seconds are wasted because of these checks? If someone wants to run server-grade hardware on their home computer, let them, but make sure it doesn’t slow everyone else’s boot process down. 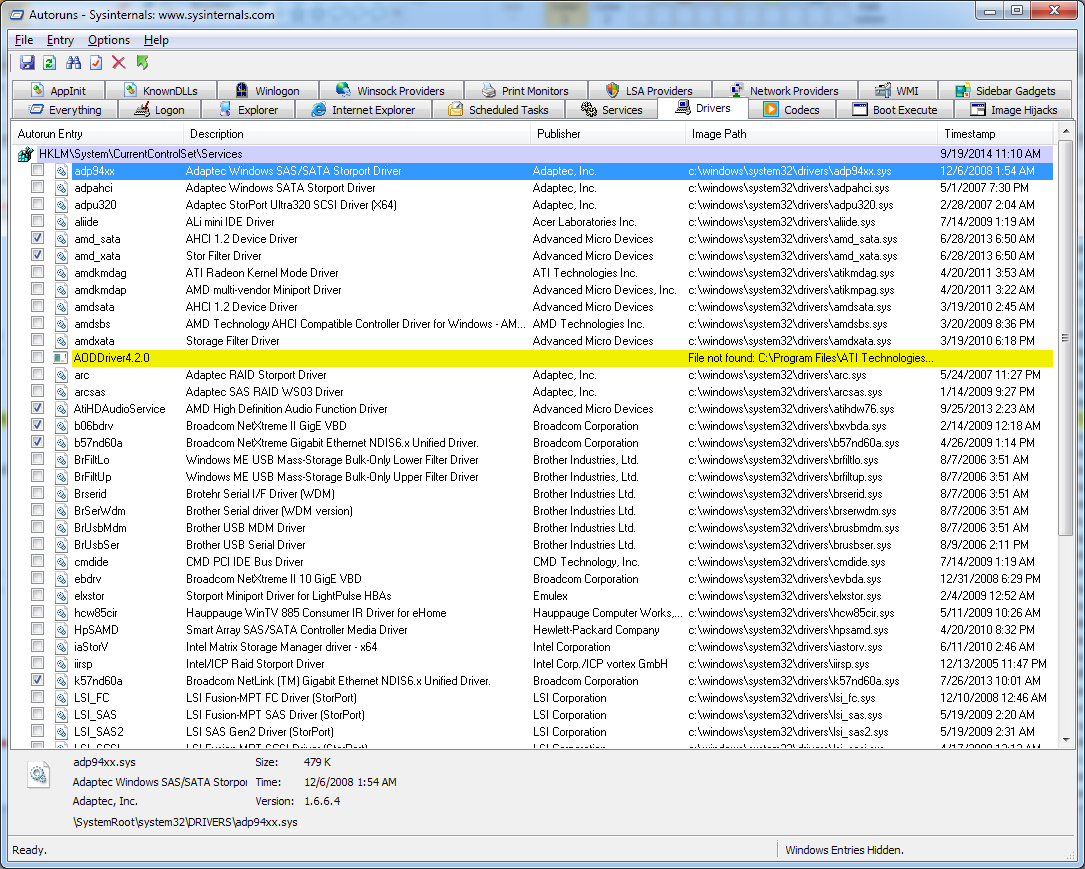 Turns out after I disabled all those extra drivers, the system both a) boots faster and b) seems to run more smoothly. No more crashes, no more extra crap getting started in the background. So I’m happy.

But one other thing I noticed, before I go: Why the hell isn’t the Microsoft Windows Defender DLL “mpsvc.dll” a signed binary?

I had the same problem with the Windows 7 Hibernation feature not showing up and had to go searching for the following answer. It makes sense, but only if you mean it doesn’t make sense. 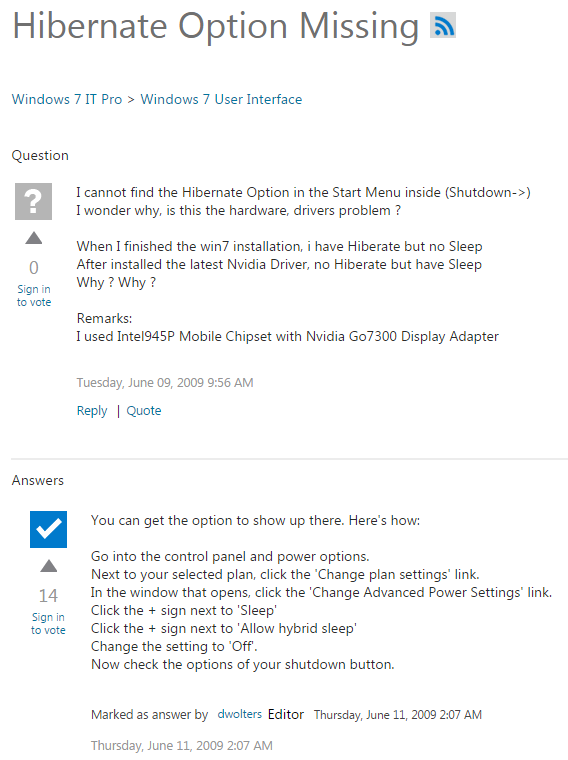