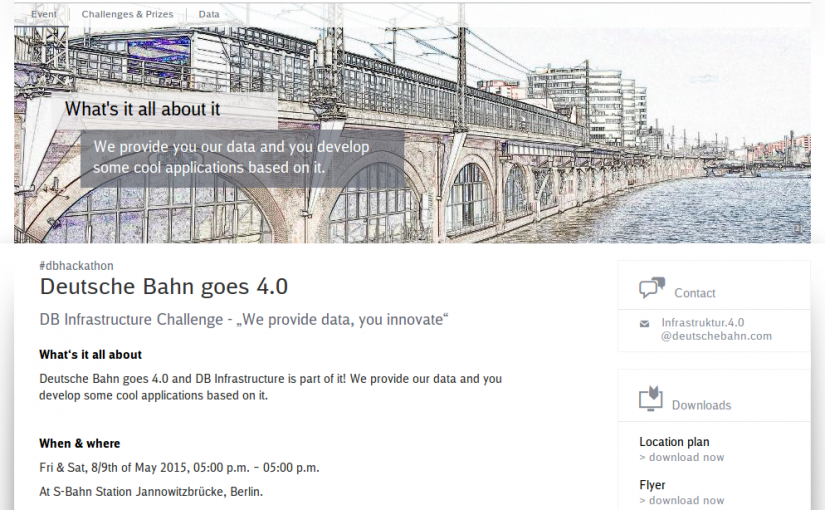 This is the retrospective on the Deutsche Bahn hackathon I attended in early May. It was also the first one I attended where the prizes were so tiny, and the goals so relatively preordained, as to be a complete waste of my time.

Here was the challenge: Deutsche Bahn would export a bunch of their operations data into CSV, SQlite, and other formats. Participants would take that data and attempt to utilize it in some way to help Deutsche Bahn’s bottom line. The winner would receive a “prize” of being allowed to present / pitch the results of their hack to people at Deutsche Bahn. Wow. You don’t say? In this case, the benefits accrued only to Deutsche Bahn. There were no real intermediate prizes, no smart watches, or doodads of little intrinsic value but plenty of hype value. This was not a hackathon where the benefits of spending 24 hours hacking on someone’s code or API would lead to some better outcome for the participant, not even indirectly.

Basically, this hackathon was a free Research & Development event for Deutsche Bahn’s crusty logistics department. What we found out, when looking into the data provided, was how poor quality it was, and how limited our ability to process it would be. The ideas that I (and seemingly every other participant) worked on, was to map out the track data overlaid with incident data and data regarding track anomalies (twisting in the rails, or rail gauge drifting slightly apart).

The event was held in a brick-lined space underneath the S-Bahn line at Jannowitzbrücke, in Berlin. This was actually interesting, to see some of the spaces that Deutsche Bahn withholds from rental, for whatever reason.

The presentations that won were created by teams of people from companies specializing in data visualization. The most useful ideas, I thought, were overlooked because they would be too hard to sell to the management level. Instead, the winning team were representing a company that makes pretty-looking web graphic / web control panels, that give an overview of the data coming into the platform. A good fit, but infographics may not actually be as useful as hard inefficiency analytics (which one of the participants, a specialist in logistics research, did present).

Anyway, overall, the feeling I got from the event was of giving-only, there was no quid pro quo here. This was the first event where this was the case, and is something that makes me exceptionally cautious against participating in future events.