tl;dr: It was a Lenovo, and there are some things you might want to uninstall from your Lenovo.

I’m kind of in awe of how sneaky these guys are, in terms of the stuff they preinstalled on the system. Some of it appears to be straight-up spyware (otherwise known as “user-experience enhancement” software) of some sort, and I’m trying to figure out what these programs do before I wipe them off the system.

Note: I made sure not to use any of my internet passwords or internet services before I had a chance to take a closer look at the three programs in particular, which I do not trust. I’m also writing this blog post from the new laptop only after uninstalling the programs.

The three programs are:

The CCSDK has a log file folder, CCSDK\log, which seems to gain a log file every time you restart the computer.

I wonder what WinGather.exe is, what it gathers, and what it sends.

Question: What is it telling the Lenovo server, and why?

I’m not sure what the answer to this is, as I didn’t get a chance to run Wireshark against the programs, before uninstalling them. Also, I noticed that Ccleaner removed some files related to Lenovo from the Windows Temp folder, but I forgot to check there after uninstalling the Lenovo apps.

Additionally, two files are regularly updated in the GDCAgentSetupRed folder, database.db and sendlog.txt:

Let’s take a look at sendlog.txt. Oh look, it’s filled with timestamps. That’s nice. I’m glad to know our Chinese overlords are aware of when I’m using my laptop:

Let’s take a look at database.db, maybe it’s in a standard format we can decipher? I tried using SQLite Database Browser, but it doesn’t recognize the file format. If someone has a better idea on how to crack this file, get in touch with me, and I’ll send it to you. Who knows, maybe you’ll get my admin password (which would suck), but then if it’s in there, we all have much bigger problems.

The 80M4002DUS identifies what model of laptop I bought, which the astute reader could google easily enough. (Admittedly, it’s not a bad little laptop for the money, either.)

The row with dashes actually seems to be some kind of unique identifier, and there were a lot more digits in there, which I’ve blanked out for obvious reasons. I’m not sure how the identifier is formed, I checked the network MAC addresses, but it doesn’t seem to be using those.

The GDCAgent.exe program will listen to connections on localhost port 31752. I’m not sure what exactly it does with this open port, though: 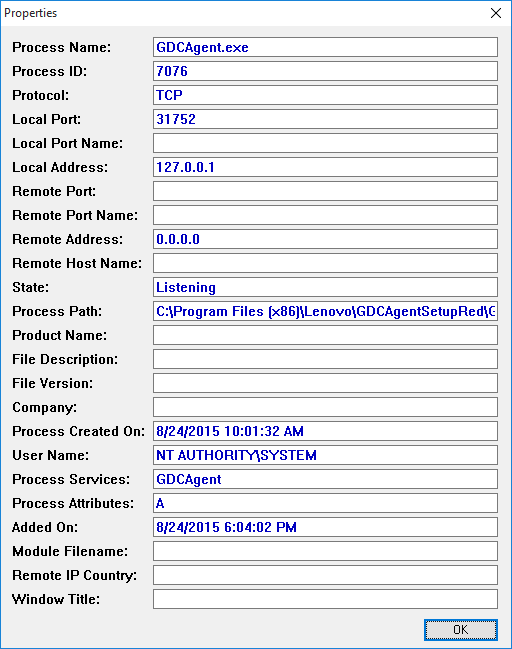 Digging into the process tree on the system reveals that Lenovo’s three programs run with pretty high credentials. 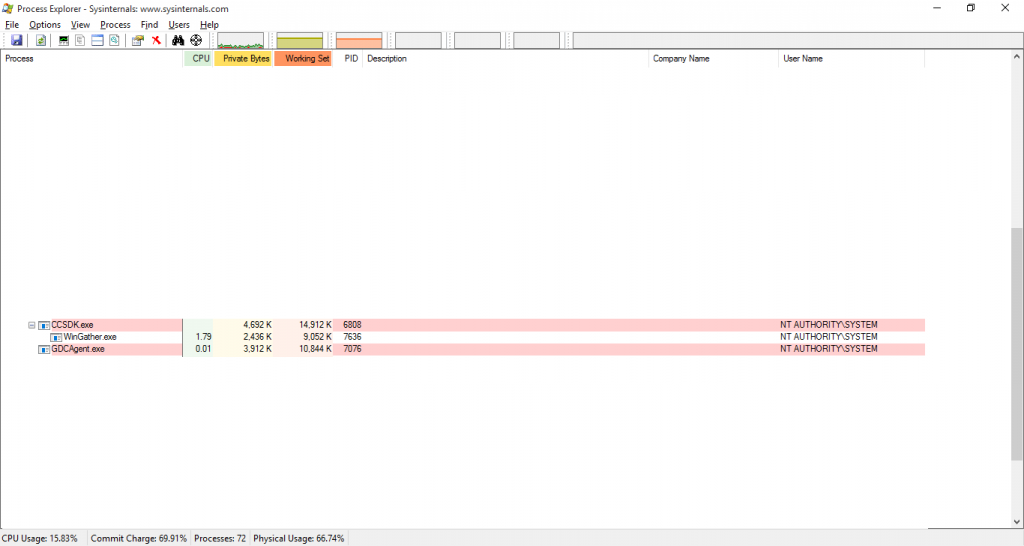 Programs like these can do just about anything they want to a system: restart it, shut it down, rewrite firmware, and so on. Also irritating, neither the Description column nor the Company Name column are filled in.

So what, exactly, do these programs do?

For $180 including tax, the laptop was a pretty good deal, it’s only $80 more than getting a Windows license. But it’s buyer beware, with these dubious pieces of software running at all times on the system.

After uninstalling all of the Lenovo preinstalled software, I noticed no difference in the functionality of the laptop. The volume up / volumn down function keys, the brightness up / brightness down keys worked fine. So by that logic, the extra apps that they installed perform no role but to report back to Lenovo every time you turn the computer on or off.

This is not why we buy computers.

6 thoughts on “A Little Something Extra”